Today’s Foodie Friday is the first No Joe Schmo snapshot, a new series that will briefly chronicle a cool or crazy job through one photograph (snapped by yours truly). The snapshot series — which will appear several times each month — are super-condensed versions of No Joe Schmo posts, just featuring the photo, one or two direct quotes describing the job, and a bit of logistical info. The series kicks off with a Foodie Friday featuring a New York City food truck! 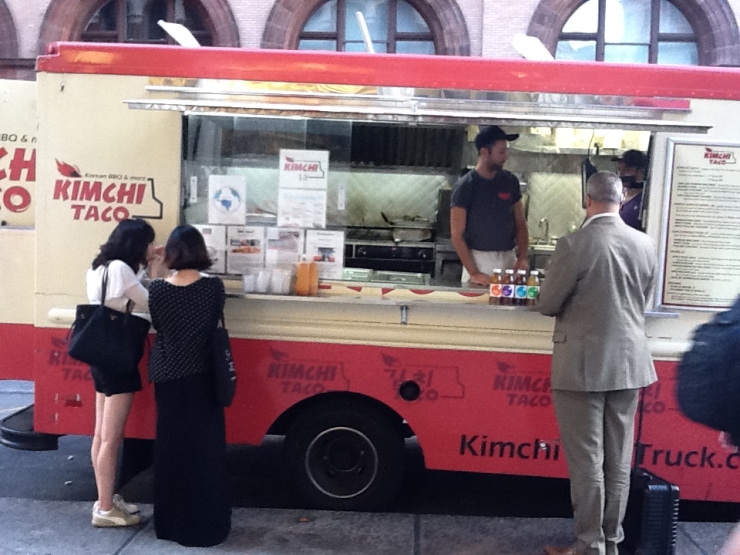 “Kimchi, a part of Korean culture, isn’t too big in the United States. By mixing it with tacos, we’re bringing it to mainstream New York. I love introducing people to something they don’t know about.”

Who: Christian Manzo, 27
What: Part-time worker at the Kimchi Taco Truck, which serves up Korean barbecue-inspired tacos stuffed with marinated beef, braised pork, and chicken. The truck’s owners fused their Korean heritage with their Philadelphia roots, resulting in a Kim-Cheesesteak Sandwich. All kimchi is made in-house.
Kimchi is: Spicy, pickled cabbage “essential to every Korean meal.”
Where: Various destinations in Manhattan, NY, including Soho, Midtown, and Astor Place.
Favorite menu item: Pork tacos.
Originally hails from: San Francisco, where Korean culture and food trucks are “huge.”

Hungry for more? Click here for more Foodie Fridays on No Joe Schmo, like the co-founder of Crumbs Bake Shop and creative director at Dylan’s Candy Bar!

One thought on “Foodie Friday: The Kimchi Taco Truck”

New post alert! ➡️ Chau Ka-ling has earned a reputation as Hong Kong’s “snake queen” — she’s an expert 🐍 handler and runs a renowned snake soup restaurant in the city’s Sham Shui Po district.
From the archives • Only a handful of people in the U.S. extract snake venom, and Jim Harrison is one of them. He established the Kentucky Reptile Zoo in 1990 to do just that. 🐍
From the archives • Wally Feresten thought he wouldn't get the job writing cue cards for @nbcsnl 20+ years ago because his handwriting was so sloppy. Now he runs the show with a calmness that may seem unusual for a career rewriting cue cards for SNL sketches just minutes before they air.
From the archives • It’s a decades-long tradition that looked a little different last year: Confetti fluttering down into the crowds in Times Square on New Year's Eve. Treb Heining is the confetti coordinator, declaring those magic words into his radio — “Go confetti” — precisely 20 seconds before the clock strikes midnight.
From the archives • June 2019 • Ho Sau-Mei is the only female mahjong tile carver left in Hong Kong. She first learned the art at age 13, and her current shop is inside her childhood home from the early 1960s. 🀄️
A little about the art at the top of today’s profile of chestnut roaster Chan Yuk-Lan ➡️ It’s featured as part of a collab with @alvinckl, whose watercolor sketches are painted by hand and on-site around Hong Kong. More details in the post. ✨
Loading Comments...
Comment
×
%d bloggers like this: