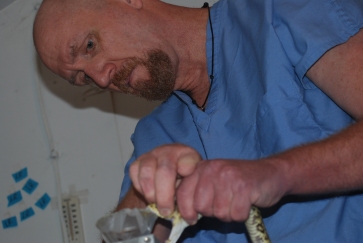 Only three or four people in the United States extract snake venom — the real deals, that is. Jim Harrison is one of them.

He typically “milks” about 150 snakes in two hours, or approximately a minute per snake; it’s kind of like an assembly line of venom. He doesn’t wear gloves — they hinder his dexterity — and while he’s “only” been bitten nine times in almost four decades on the job, his shortened right forefinger is due to a kickboxing mishap, not a snake bite.

There’s a lot that people get wrong about the job, Harrison explains. Plenty of people call him up, wanting to learn how to extract snake venom as a get-rich-quick scheme. But in reality, it’s a limited market, and the hardest part comes after the venom has been funneled into tubes and shipped out.

Harrison runs the Kentucky Reptile Zoo, where about 2,000 snakes reside, along with his wife Kristen. He proposed in 2004 while filming for the National Geographic show Snake Handlers in St. Lucia. “People think of venom and they think of death,” he says. “I think of venom and I think of life. It saves more lives than it will ever take.”

Age: 57
Based in: Kentucky
Graduated from: I dropped out before I finished my degree in biology, which is how I became a police officer.
Years in the business: Almost 40

Previous jobs: I worked on an alligator farm at age 15. At 21, I supplemented my income by pro kickboxing and valley hunting. Then I became a case officer. It’s hard to put me in a box.

Let’s start with the elephant in the room: When I think of milking an animal, I think of a cow. A snake doesn’t… have udders. Among people who do this, “milking” actually isn’t the accepted term; it’s extracting venom. We’re herpetologists. It’s a very specialized group, as there’s not a huge demand [for snake venom].

Number of snakes at the Kentucky Reptile Zoo: At any given time, we’ll have anywhere from 1,600 to 2,000, which includes more than 100 species. The average lifespan of a snake in the wild is 8 to 10 years, or 15 to 20 years in captivity, but several at the zoo are over the age of 40. Just like humans, snakes can develop cancer or die from heart attacks; they tend to get fat because they don’t use a lot of energy.

How long does it take to extract venom? It depends on the species, but I normally milk 150 snakes in about two hours — that’s about a minute per snake. I average about 600 to 1,000 snakes per week. My record is milking 1,000 Malayan pit vipers in four hours.

Tell me about your process. To start, the snake needs to be hydrated. A funnel catches the venom, and we use lab-quality, sterilized glass to contain it because snakes’ mouths are not sterile. You could teach a monkey to do it, but keeping the snake alive afterward — and keeping me alive — takes a lot more effort than people realize.

I wash my hands between animals, but I don’t wear gloves, because washing those would break down the material and not provide enough dexterity to handle the snake properly. I wear surgeon scrubs and snake-proof boots that have a powdered Kevlar.

Have you ever been bitten? Not in the wild. I’ve only been envenomated nine times in my life, which comes out to about one accident per 65,000 extractions. Most recently, last January, I was bitten by a South American rattlesnake. The tube collecting venom cracked because it had been washed too many times with bleach. We were 30 minutes from the nearest hospital, and I was paralyzed; I couldn’t open my eyes. People told me afterward that in the ambulance, I instructed them how much anti-venom to give me, but I don’t remember any of that.

But that didn’t stop you from getting back to work. Normally, I’m back at it within 24 hours after getting bitten, as long as there’s not tissue damage preventing me from moving my hand.

I live by the Bushido Code of the Samurai: It’s not when you die, but whether you die a good death. When I wake up, I’m prepared that it could be my last day on Earth and I want do something to help people out. You can’t focus on mistakes.

What’s the going rate for a bottle of snake venom? Some sells for $50 per gram, which isn’t that much — you need 60 snakes to get a gram. Pharmaceutical companies purchase it from us because we can show we can breed snakes under less stress. If the animal is under stress, it typically doesn’t yield very much venom.

How it’s used: The venom mostly goes to researchers looking for cures for different diseases: in cancer research, neurological disorders and lupus tests. A small percentage goes to antiserum for people who have been bitten by snakes. We keep some of that on hand at the zoo.

What it looks like: Some can be yellow or white; it’s really cloudy due to all the protein. When freeze dried, it looks like yellow grains of salt. Venom from black mambas [Africa’s longest venomous snake] is totally transparent, like water. Generally, the venom is very viscous and sticky.

Have you always had a thing for snakes? I caught my first snake at age 6 and my first rattlesnake at age 12. I hitchhiked into South America at age 16 and collected snakes for zoos. By age 18, I was extracting venom from a king cobra at a university where my friend was doing research.

How long have you worked at the Kentucky Reptile Zoo? I founded it as an institutional nonprofit after moving to Kentucky almost 26 years ago. I’d been giving lectures on extracting from my house. I still train people how to handle venomous snakes — my wife and I just got back from a trip to St. Lucia where we did that — and I also teach safety to law enforcement and wildlife officials.

Best part of your job: Talking to kids. I try to be realistic — instead of saying they can never be venom extractors, I say that it’s a limited market and dangerous to some degree. I like being able to go into a room, close the door, and just be with the animals.

Most challenging part of your job: Dealing with adults. Many have preconceived ideas of snakes and extracting venom from TV programs and such, so I have a long way to go with educating them.

Salary: I don’t take one. I don’t like to see people suffer, so if we can come up with ways to avoid that, that’s my goal. I live off a small pension I got as a police officer at age 26, when I was hit by a car during a pursuit and my heart stopped.

Your dream job as a kid: I wanted to be a professional fighter and work with snakes. My mentality was: If I can think it, I can do it.

🐝 The official pronouncer at the Scripps National Spelling Bee, Jacques Bailly, told @nojoeschmo back in 2017 about the year-round preparation it takes for just one crucial day on stage. Last year, the bee was cancelled for the first time since 1945 — which made 2021 all the sweeter.
🚨exciting new lewk alert! @nojoeschmo has a beautiful new logo (its first professional one!) designed by none other than @alvinckl ✨✨
New post alert! ➡️ Chau Ka-ling has earned a reputation as Hong Kong’s “snake queen” — she’s an expert 🐍 handler and runs a renowned snake soup restaurant in the city’s Sham Shui Po district.
From the archives • Only a handful of people in the U.S. extract snake venom, and Jim Harrison is one of them. He established the Kentucky Reptile Zoo in 1990 to do just that. 🐍
From the archives • Wally Feresten thought he wouldn't get the job writing cue cards for @nbcsnl 20+ years ago because his handwriting was so sloppy. Now he runs the show with a calmness that may seem unusual for a career rewriting cue cards for SNL sketches just minutes before they air.
From the archives • It’s a decades-long tradition that looked a little different last year: Confetti fluttering down into the crowds in Times Square on New Year's Eve. Treb Heining is the confetti coordinator, declaring those magic words into his radio — “Go confetti” — precisely 20 seconds before the clock strikes midnight.
Loading Comments...
%d bloggers like this: